Naveen Kapur is an interesting man – though he is an alumnus of St. Stephen’s college, and has done LLB from Law Faculty, MBA from FMS, and Foreign Trade from IIFT, he is nevertheless, a student of life! He says,

“Experiences make you what you are today”

Naveen, I couldn’t agree with you more!

Full of energy, he has prepared for the interview, and is meticulous in the details he reveals to us. This indicates to me a man who is respectful of others, and knows the value of time. With this preparation, he has shown courtesy, and ensured that he added real value to us. It was also Naveen who managed the session with such dexterity, that his narrative kept us enthralled!

His first job was a supervisory role on the shop floor of a manufacturing company in Faridabad, post his graduation from St. Stephen’s. Not one that most Stephanians would deign to accept. For Naveen though, he did not seek it, rather, the opportunity arose when a friend of the family was visiting one night, and at the dinner table, mentioned a possible opening at this factory! The next morning – Naveen presented himself for employment. And so began his life in a factory.

Naveen Kapur says of his life “I never planned it, it just happened. Opportunities would come along and I would jump at them – serendipity? It was God’s plan.”

The lessons he learnt were endurance – of the body, the mind and the spirit, the smell of Benzene still a strong memory. Driving to Faridabad from Delhi on a scooter at 4 am to reach in time for a 6 am shift – it must have been tough. He did this for four years! The funny thing is, Naveen studied Economics because he did not want to be an engineer, doctor, chartered accountant or lawyer – at that time the only credible professional choices! Yet here he was, surrounded by machines and technical “stuff” he had to solve on a day-to-day basis.

Naveen also really understood the value of human life – and the difference he could make to the workers he supervised. How do you build rapport outside your comfort zone? He had to, and this was a lesson in leadership that stood him in good stead through 40 years of his career.

“Education for me was primary, the work was just time pass” says Naveen 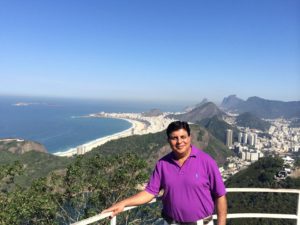 It was while at the factory that he began doing his MBA in FMS in the evenings, majoring in International Trade. He also earned his PhD in Endurance – for after a long day at the factory, he would ride to Delhi University for evening classes, often reaching home after 11 pm!

The young Naveen had a dream – he wanted a career in international trade and he was going to achieve it by “learning on the job and upskilling for the future.”

IIFT – Indian Institute of Foreign Trade – was next, and Naveen tells us how he got an opportunity to run this small export firm around this time, which was like managing his own factory, “being boss of myself, learning to deal with inspectors” – was that luck? He got a chance to practice all that he was studying!

He calls it serendipity – and all the Business Gurus from Tony Robbins to Simon Sineck call it the ONE thing, the WHY, and no plan B! Naveen was working as per God’s plan, and look where it has brought him! Never one to back down from a challenge, he has used the skills he learned in the School of Life to manage people effectively.

If you know what you want, if you are hungry enough, everything you do will take you one step further along the path to achieving that goal.

“Two roads diverged in a wood, and I – I took the one less travelled by, and that has made all the difference” Robert Frost

Naveen Kapur has more than 40 years work experience of which 35 years in international business. He has been the President of the International Business Division of large and well know corporate house for the last 20 years where he has travelled overseas on an average for 220 days each year. He has travelled to more than 100 countries in South and South East Asia, Middle East, Russia, Europe, Africa, Northern, Central and South America.
Naveen’s has an abiding passion for travel and after his business suit is off he is an avid tourist soaking in the culture, history, customs, local cuisines, local language and given his amicable nature a legion of local friends .
Student of and for life