“I like being a woman, even in a man’s world. After all, men can’t wear
dresses, but we can wear the pants.” – Whitney Houston 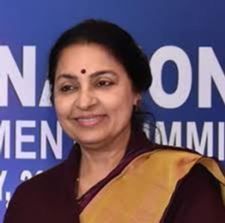 Meenakshi Davar, the first full-time woman Director in the central Public Sector undertakings under the Ministry of Power– yes, that’s right, she’s the first! Born into a “fauji family”, she is the daughter of an Indian Naval Officer. Her mother broke stereotypes – living in Nigeria in the 1960s, she worked as a teacher and drove alone across the city, and Meenakshi grew up learning to chase her dreams.

“Be who you want to be. There will always be challenges in life but never give up your career.” This then, was her parents’ message to her.

I guess that explains her success – requiring perseverance, patience, hard work and self-confidence, in a traditionally male dominated working environment that still exists in a large part of corporate India.

A rapport which Meenakshi developed over the years was with the Trade Unions, unusual for a woman. It was her principle of collaboration and looking out for others that helped her do this. She won their confidence and trust by reforming the paperwork to ease their work related issues and establishment matters. They called her ‘Badi Behen’!.

At a certain point in time, issues with Worker Unions were building up – resulting in an all India problem with everything coming to a standstill – a nightmare for any company, specially in the public sector. Meenakshi was called to mediate the matter, which was resolved in 45 minutes! The Union trusted her, would speak only to her, and the result was that the strike was called off! Meenakshi emphasizes that she deemed it a victory, only because it was a victory for both sides.

Relationships are successful only when there is a spirit of cooperation. And that cooperation is developed when both the people in the equation fulfill their part of the bargain.

“You have to take everyone along with you and it has to be a win-win situation for both. That is what I call Creative-Cooperation.”

What seemed like an easy victory was a result of years of hard work of building relationships and consciously maintaining transparency. The trust the leaders of the union had in her was such, that whatever she asked them to do they knew that she would be fair.

“Women are very different from men. We prefer cooperation over working in isolation, we think aloud and believe in collaboration. Collaboration is one of the best lessons I have learnt.”

Being in HR, she has had to constantly manage employees of various departments, the management, and trade unions too at an all India level.

Her career began in the public sector – a field dominated by men. With only 6% of the staff being women at the time she joined, she’s seen the number double over the years and has been a catalyst for the change herself.

She has worked hard to get where she is and is proud to be a senior executive in this so-called man’s world but her progression hasn’t come without challenges – be it proving to her seniors that she can deliver as well as manage work and home. Surprisingly, ‘gender bias’ is not a challenge she has had to ever face which women are commonly subjected to in the workplace. In fact, she has always been in an environment at work and home which has aided her growth and encouraged her to achieve what she has set out to do – even her MBA at the age of 36. “This can only be achievable when you have a supporting husband and more importantly, supportive children”, she says.

“A few mantras I have always followed in life – creative-cooperation, build your character and competence, and be committed to the cause in thought, word and deed.”

Meenakshi compares one’s professional journey to that of a swan. Make your journey seem effortless by building your competence so that it’s only your grace that people see and not the hard work of the paddling below the surface of the water. Along with that build on your character. Together these two will help develop trust among your peers and they will collaborate with you on your journey to success!

This is how Meenakshi has won the hearts of her colleagues and seniors over the years – the 5C’s – cooperation, collaboration, competence, and commitment to your cause.

Meenakshi, is an exemplary role model for young women who want to achieve their dreams.  Now know, that nothing is impossible.

(Meenakshi has spent last 36 years in the HR function. She has handled all areas of HR including Appraisals and Promotions, Training, Establishment, Policy, Industrial Relations, Manpower Planning and Administration.
She is the recipient of Amity’s Women Achiever Award 2016 in the area of HR.
In 2017 she received the ‘Women Persona- InWENA of the Decade ‘–Public Sector Enterprises Award for contribution to the Power Sector and Public Sector at large across functions like Human Resource, Corporate Social Responsibility, Technical Planning, Resourcing, etc.
In February 2018, the Forum of Women in Public Sector has felicitated her with ‘The Achiever Award’ for leading by example and creating a lasting impact in the organizations she has worked for. Fame India Magazine in their 2018 issue has rated her as one of the 25 Shaktishali Women in the Country.
In March 2018, she has been honored for her exemplary leadership skills and conferred with the Amity Leadership Award.
In August 2018, she has been conferred with the ‘Seasoned HR Professional Award’ by National HRD Network at its 21 st National Conference for her significant contribution in the field of HR.
In September 2018, she has been awarded with “Women Super Achievers Award for Excellence in HR” at 17 th Asia Pacific HRM Congress Awards 2018 by CMO Asia.
In December 2018, she has been awarded with the ASSOCHAM’s ‘Women in Energy Sector- Excellence in HR’ for her immense contribution in Power Sector in ASSOCHAM’s conference on ‘The Energy Agenda 2030- Innovation Development and Energy Excellence Awards.
In February 2019, she has been awarded with “Pride of HR Professional- Public Sector Profession” in the World HRD Congress presented by TIMES ASCENT.
In January 2020, she has been awarded with “Top Rankers Excellence Award 2020” for HR Leadership.
In February 2020, she has been awarded with “Chanakya Award for Best HR Person of the Year” 2020 in HR Field Category by PRCI.)

A Woman in a Man’s World