“You mean you waited for so many days for an appointment with me just to waste my precious time, young man?“ shouted the elderly, white haired Secretary of the Table Tennis Federation of India. Why this dudgeon? Because I had asked for his help in procuring 3000 Table Tennis tables to fulfill an order I had got from the government of Angola. “Angola? Where is that? Some God forsaken country in Africa where everybody is shooting everybody else, hai na?” he continued. “Why are you wasting your time and mine? Please leave!”

This business of being asked to leave an office was becoming a part of my routine! I simply wanted to buy Table Tennis tables and the Secretary guffawed when I mentioned the numbers. India with a population of just about 1 billion at the time bought 2000 tables annually. How could Angola, with a population of 20 million, need 3000 tables?! “Are you talking about 3000 TT racquets or tables?“ he asked sarcastically. Good question.

I had posed the same question to the grumpy Minister-in-charge in Angola prior to signing the contract. He had simply smirked and dismissed me with a brusque “All the terms and quantities etc are given in the contract”.

It had all started in the lobby of the Hotel Panorama, in Luanda, Angola in 1998. “These bloody malaria-laden mosquitos will kill us,” said the lady in red waiting at the reception lounge, as she swatted at insects that appeared to be particularly attracted to her. She and I had traveled on the same Ethiopian Airways flight from Addis Ababa to Luanda the previous day, and as I watched in amusement, she recognized me. “What are you smiling at?” she asked, with a little smile herself.

“Nothing,” I replied. “Well actually, your battle with the female anopheles is something we confront in India all the time, and I have the perfect solution.” And, with a flourish, I pulled out a tube of Odomos and handed it to her, and showed her how to smear it on her skin. “This is a weapon of mass destruction!” she exclaimed with a wide smile of relief as the Odomos did its magic.

Lara Almeida introduced herself and told me she was in Luanda on a holiday as a guest of her uncle. I told her I was there to drum up business in the aftermath of the four-decade long war of independence followed by the civil war. We were both waiting at the reception lounge, she for her uncle and me for my business associate, both of whom were characteristically late. I had been forewarned that time stood still in Angola.

My attempts to call my associate proved fruitless, so when Lara’s uncle Domingo showed up, she introduced me to him as the man with the magic potion to ward of mosquitoes. Mr. Domingo, a burly man in an un-ironed grey safari suit accompanied by several Kalashnikov toting bodyguards in battle fatigues, was clearly a man of power and quite possibly a warlord. He spoke not a word of English but graciously offered to take me along on a sight-seeing trip. Though the small army accompanying him should have given me a pause for thought, I accepted with alacrity. At the time, Angola was one of the most dangerous places in the world. Mugging and looting were commonplace, and the homicide rates were the highest in any country at the time.

We wandered around Luanda for a few hours, a wonderful city with colonial Portuguese architecture – 16th Century whitewashed Catholic churches, the corniche on the Atlantic Ocean, and decayed footpaths swarming with street vendors. The city had been important in the slave trade—the forts coexisted with shops selling ebony wood carvings and sculptures,  ivory, and bright coloured African printed fabrics. Over all of these hung a pall of sorrow—most buildings were pockmarked with bullet and mortar marks.

I listened in fascination as Lara translated Domingo’s recitation of the history of the town interspersed with his military escapades. I peppered him with questions and he answered, sometimes with a smile, and sometimes with a grim look, particularly when he described the mayhem of the previous decades.

Uncle Domingo took pity on this Indian, let down by his business associate in an alien land, unable to comprehend the language. He asked me what I wanted to sell in Angola. My prompt reply surprised him: anything Angola required! I went on to explain that being a merchant exporter we could supply anything required. Uncle Domingo, after hearing my track record in other countries, was convinced. He forewarned me not to expect quick results since Angola worked in slow motion. I was resigned to my fate and to the mercy of Angolan mosquitoes.

Two days later, my hotel phone rang unexpectedly. Hoping that my business associate was finally establishing contact, I picked up the phone instantly. “Mr. Naveen!”, it was Uncle Domingo! Lara continued the conversation. They had a business opportunity for me—a Portuguese bidder had failed to supply Table Tennis tables to a Ministry and if I was interested in picking up the bid at the originally contracted price, Lara and Mr. Domingo could make it happen. I dashed down to the reception faster than a Manmeet Singh serve!

Our office in India confirmed that we could procure the tables from a well-known manufacturer. But, 3000 tables? Supplies of the requisite quality was not an issue but delivery time was. Uncle Domingo once again came to our rescue to extend the delivery time by six months. Another battle won.

Back in India, the supplier’s factory space was augmented and looked like a Durga Puja pandal—workmen working through the night under tents with langars to complete the orders. Eventually, shipments were made and payments received. We received a letter of appreciation from the concerned Ministry for the supplies made in terms of quality and delivery.

Two months later we receive an SOS trade inquiry for 2500 non-standard mattresses along with equivalent mosquito nets from the same Ministry. We quoted and won this supplementary contract.

I stopped by Luanda a few months later to sniff out further opportunities. Uncle Domingo met me at the airport and whizzed me through customs and immigration and took me directly to the Ministry. The Minister was polite this time and welcomed us warmly. He said all was well with the previous supplies and thanked me profusely. There was a caveat there though—we weren’t supposed to visit the Ministry again for the next year or so. Nonplussed, I asked why!

The Minister looked at me sheepishly and confessed that a requirement for 30.00 units of table tennis tables had, due to a clerical error, become 3000 tennis tables! A floating decimal point had been the cause of this oversight.

“So, what did you do with the extra 2,970 tables?” I asked in bewilderment.  Jugaad, African style! 100 odd tables were used for the intended purpose. 2500 others were provided for hostels where they became beds on floors with the stands reworked to be made into posts to hang mosquito nets! The balance 400 tables would be used in libraries and as dining tables since the budget on these counts had been trumped by the TT Tables.

A quarter of a century after Ping–Pong Diplomacy, this became an example of Ping Pong business opportunity. 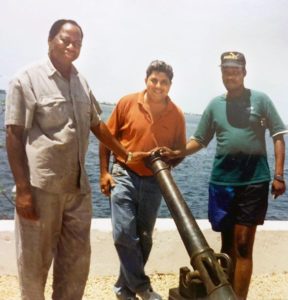 What a learning experience for me. Lara and Mr. Domingo taught me that being a curious stranger in a strange land can lead to friendships that open doors that would not otherwise be opened.

At times business happens by default, not design.

When Governments buy they buy big, even if mistakenly.

Finally, carry a tube of Odomos and always help a damsel in distress!