“Ni hao -Welcome to Wenzhou, the city of riches!” said the A to Z (Armani to Zegna)  designer label clad young man as he bowed in the customary Chinese protocol and reverentially presented his business card, clasping it with both hands. The business card had his Chinese name on one side and his English name “Allen” on other side. “You must be tired after the flight -we have arranged a massage for you,” he offered. I was not in the least tired – a mere 5-hour jaunt was nothing compared to my usual long 15 hours plus haul flights.

“Bu’yao!” I said, practicing my limited Mandarin. “I’d prefer to check in to my hotel and then visit your factory.” I detected a brief look of dismay on his inscrutable face and attributed it to disappointment at my declining the offer for “refreshing me” with massage. Little did I know!

A luxurious stretch Lincoln limousine equipped with state-of-the-art technology WiFi, television, video games, psychedelic lights, a karaoke machine and a well-stocked minibar whisked me to my hotel in about 20 minutes. This was far removed from my usual sales tours, jetlagged, sleep deprived, locating rickety taxis that would transport me from depressing airports to even more depressing hotels, driven by depressed drivers with whom I had to negotiate fares in sign language!

The city, somewhat incongruously, had elements of fin- de- siècle French architecture, most notably a full-size replica of Arc de Triomphe. The rest of the city had a well-developed skyline with looping multilevel flyovers past swanky, though seemingly empty apartment blocks. Sleek limousines cruised past us.

I was in Wenzhou to place an order for 10,000 units of transformers for which we had been awarded a tender in an African country by virtue of being the lowest bidder. My colleagues had been impressed with the website hosted by this company and it’s glossy catalogues, proclaiming its credentials of a large workforce with happy Chinese workers assembling transformers and impressive list of many European customers. My team was convinced they were the best company since their prices were far lower than the other offers made by suppliers from India and China by a long margin.

I was suspicious. My inner voice and previous experience in sourcing from China, however, cautioned me to do some fact checking first-hand before we placed our order much to the chagrin of my sourcing team. Our technical head of operations and I set off to Wenzhou.

The hotel lobby was almost as luxurious as the limo. Soft Chinese music, delicate draperies and the smell of jasmine tea greeted my senses. An alert and smiling check-in receptionist handed me a key to the Presidential Suite, for which my hosts had pre-paid! Uh oh – I was clearly being provided a little inducement, an act that only increased my suspicions. I declined the generous offer with much bowing and scraping all around, the suite was downgraded to a club room that was charged to my credit card.

Allen then informed that the Conference Room, where the ceremonial signing of the contract would occur the following morning, was ready for my inspection. Local media would be in attendance! This guy was an operator, working me over to get me to “Yes” before I was ready – what a salesman! But, I gently and firmly declined and told him that there would be no signing of contracts till I had seen his manufacturing facilities. Their desire to put the cart before the horse raised another red flag.

So, bright and early the next morning, we headed to the plant. “Nice looking building,” I thought to myself as we got close. It was sprawled over a large area giving a good first impression. We were ushered into a well-appointed conference room and watched a PowerPoint presentation about the company inter alia showing exports to many countries in Asia, Africa and Europe which further strengthened our belief in the company. Nevertheless, a niggling misgiving persisted.

“Now, let’s see that great shop floor of yours, Allen,” I said heartily. “Wouldn’t you rather have some more connoisseur pearl tea, have lunch followed by sightseeing then to the hotel for a well-deserved massage?” Allen replied. Massages left us cold .We had come to have our balance sheet /order book “massaged” with a quality and reliability of our suppliers so that we do not betray the trust our customer in Africa had placed on us  -“We want to see your shop floor.” I insisted sternly.

When we entered the shop floor, it was deserted, and there was no activity or life! A graveyard would have been more alive. “Where are the 1500 workers?” I asked in wonderment. Pat came the reply – it was mealtime and they had gone to lunch.

Allen suggested we go out for a traditional Chinese meal. When asked what to order, we promptly gave him a carte blanche since he knew the restaurant better. The lazy Susan on the table was soon busy and groaning under the weight of with a vast array of sea food including the yellow fin croaker with mustard, stir fried eel, shrimp, oyster and octopus whose tentacles were still alive and kicking when served, stewed frog with mushrooms and an emaciated “chicken” with beak and eye in place.

My technical colleague being a non-fish person took a couple of pieces of “chicken” and commented that the chickens in India were bigger in the range of 1-1/2 kgs. Allen smiled and said in China the chickens were imported from Brazil and the size was 2-21/2 kgs! He had ordered pigeon for us since chicken was common place in India and he wanted us to have something more exotic. During the lunch when we veered our discussion around transformers, Allen switched the topic to yin and yang principles of balance and harmony which pervades all aspects of life including food. Somehow the yin and yang was not working on the business that we had come for. But… I got the feeling that Allen was an innocent bloke who was trying “unsuccessfully” to impress me and had something to hide. Perhaps I would work my way with him…

We returned to the plant after the adventurous lunch and headed straight to the shop floor there was still no sign of workmen back after lunch. Chinese banquets were no doubt extensive and time consuming, but one would have expected more brevity in workers canteen. “Where is your inventory?” Glibly he grinned. “Well, the inventory had just been shipped the previous week.”

“Daal mein kuch kaala…?” said my Technical Director. “Can I see your invoices to customers?” I asked Allen, offering him a lifeline. “No, sir, our customer list is proprietary.” “How about bills of lading where the consignee name could be blanked out and your company is shown as consignor with quantities and port of discharge shown would suffice for us maintaining the confidentiality of your customers in Europe etc.” There was no escape. Allen still tried one faint hope, “They are located in a different office 500 kilometers away.”

“As the weekend was approaching, there was no sense in waiting,” said Allen, we may return to India and the required documents would be emailed to us and contract signed digitally. We told him that we would visit Shanghai and Beijing where we had other business and come back when they were ready with documents requested by us.

China does not have Google and other US search engines. A private VPN was arranged, and the Chinese search engine “Baidu” was downloaded. Over the weekend, we frantically searched for other Chinese manufacturers in other cities. We had a dilemma of having a confirmed order with Letters of Credit in place, but no supplier.

Over the next five days, we crisscrossed in China on the engineering marvel – High Speed Railway network, and visited various cities including Shanghai and Beijing looking for alternate suppliers and some sightseeing. We had contacted some manufacturers earlier and had not considered them since the prices quoted were higher than the current supplier. While their catalogues and websites were not as attractive, we saw first-hand their manufacturing capabilities. Nevertheless, their prices were not workable. We would lose money hand over fist if we chose them.

What could we do now? We returned to Wenzhou with proposals from alternate supplies representing other manufacturers, resigned to a loss-making contract. During the early morning shower an idea sprang forth. Why don’t I tell Allen we have found alternate supplier with lower price, but ethics demanded we buy from him since we had used his offer to bid.

When told the above, Allen emerged a different person altogether. Gone was his flamboyance and unctuous flattery—we were not offered massages again.

I invited him for a dinner (which he reluctantly agreed to since this was against Chinese custom). My insistence on Indian hospitality norms won the day, however. The many glasses of Mao Tai – a high alcohol content Baiju we drank—with endless toasts and Gam-beis —along with croaker fish with chillies in oil had a most surprising effect. The old adage of in vino, veritas saw Allen poignantly confessing the truth, with tears flowing down his chubby cheeks. He disclosed that his company had fallen on bad days due to some orders cancelled but he was an honest man at heart.

He wanted us to help him with this big order, claiming that he had produced high quality transformers, but as some orders were cancelled, they had to lay off their workforce and trim costs. Hence, the empty plant.  He needed help and asked us to trust him in terms of price, quality and delivery. I was ready to take a chance, but the old Ronald Reagan adage “Trust but Verify” came to mind.

On the backs of paper napkins, in moderately high Mao Tai induced spirits, we wrote out a contract that included stringent terms.

I don’t know if a signature on a paper napkin is legally binding, but Allen thought so and that’s all that matters.

Our Engineers treated Allen’s plant as our own. In the next 4 months we worked with Allen as one team and delivered high quality transformers with not a single customer complaint, adhering to the schedule agreed upon with the African customer. 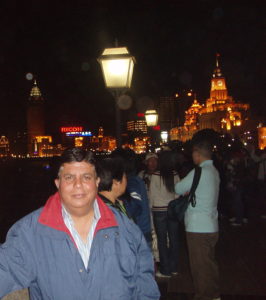 What an adventure. I learned three important lessons. “Cheap talk” in the form of fancy websites is not a substitute for quality; what do they have to lose if their claims turn out to be false? Low prices distant from other suppliers ought to be viewed with suspicion; why would a legitimate capitalist forego profits unless they were shading on quality? Finally, integrating your supply chain by sharing your tacit (engineering) knowledge with their low-cost operation can yield a “win-win”. Also, good to let the host know your dietary preferences to avoid beaked pigeons and stewed frogs. For teaching me these things, all I have to say to Allen is “Xie Xie!”

Allen continues to be a reliable and honest supplier of transformers to us, of course never again offered massages to refresh as a part of the deal !