There is something about a 1:00 am phone call that sets my heart racing.  The sensation of dread overrides the befuddlement that accompanies my groping for the offending instrument in the pitch dark. No phone call at this unearthly hour could possibly involve good news. I was right.

“Mr. Naveen, please save the chickens …this is an SOS, please help!” The accent was East African  but the voice was more than familiar. It was the Principal aide to the President of Eritrea, whom I had met a week earlier. Half asleep I said a curt “OK”, hung up and went off to sleep .

Having dined on tandoori chicken the night I wondered whether the call was a meal-induced dream with the poor chicken protesting through the Eritreans!

The next morning, I flipped my laptop open and there was an email!  The subject line from my Eritrean contact conveyed all I needed to know. “PLEASE SHIP THE POULTRY EQUIPMENT IMMEDIATELY IT — IS AN EMERGENCY!” The past midnight call was definitely not a dream!

It had all started with a chance encounter with the Eritrean Ambassador at a social event in Delhi, a few months earlier. One thing led to another and it culminated in a trip to Eritrea to bid on a tender for agricultural equipment which included milk milching machines, artificial insemination equipment, poultry equipment and the like.

Eritrea is a tiny country in the Horn of Africa with a population of less than 5 million and limited natural resources. Eritreans are proud of their leaders who live simple lives. The President lived in a humble home, drove a pre-owned Toyota Corolla, and his wife worked as a typist at the Ministry of Finance. All this information I gleaned from the taxi driver who drove me around on my visit to Asmara, the capital city!

The ride from the airport to the hotel in Eritrea’s capital Asmara in a rickety old taxi revealed an austere yet elegant landscape reminiscent of a picturesque Italian colonial town called Little Rome in Africa but with evidence of the conflict that had led to the emergence of Eritrea as a country carved out of Ethiopia.

The next day, we drove to the Ministry to bid on the tender. The Minister himself met us and he urged me to be quick as time was of the essence. And, since their money was tight, I decided that a low-price bid was the only option. Even if we lost money, we would make it up in the future, since the people of this country were clearly special and were going to make a go of it.

While I waited a few days for the resolution of our tender offer, I noticed further evidence that I was in a land of creative and capable people. Tyres were recycled as footwear. Oil cans were reconditioned as electric kettles. The paper napkins at the hotel were divided into four quadrants, providing guests the opportunity to use fractions of napkins if they so desired.

We won the bid! 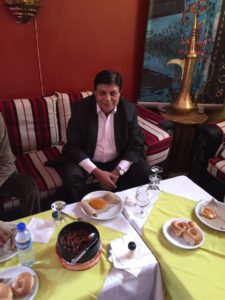 We had signed a contract for the supply of agricultural equipment including poultry equipment, for shipment within 150 days. This was not to be, because, as the email explained, there had been a mix up between the procurement arm of the Ministry and the end users. The chickens being imported would be arriving months before the poultry equipment. So, the feeding and other kinds of chicken care were now a potential crisis. The Minister, the author of the email, ended his message with a dire prediction. “IT IS A QUESTION OF LIFE AND DEATH MR. NAVEEN AND MANY HEADS WILL ROLL IF THE POULTRY EQUIPMENT DOES NOT REACH IN 15 DAYS”.

When I shared the crisis email with my colleagues, the sentiment was that we should abide by the letter of the contract and deliver within five months as committed. But, I had been to Eritrea and witnessed the difficult conditions which my colleagues had not. I believed that it was important to ensure customer satisfaction, particularly in view of the tough economic conditions in Eritrea and the potential they represented. It was the right thing to do and good business as well.

The difficulty of course was in producing in 15 days what ought to have taken 150 days. Our first vendor complained that putting three women to work would not produce a child in three months – how was he to do what we asked? His quip primed an idea – producing poultry equipment is not the same as producing a baby. Biology is not the same as injection and blow molding. So, why not put three metaphorical women to work? Over a short period of time, two additional vendors were brought on board.

Getting product to the customer was a non-trivial problem. Given that our chickens were literally coming home to roost much earlier than expected, sea shipment was out of the question. Air shipment required a hugely complicated Bombay – Frankfurt – Cairo route. Though this would be costly – we would be in the red to the tune of roughly 200% of the cost of the equipment. I believed the goodwill earned would, in the long run, be worth it. Needless to say, persuading my Finance and Accounting colleagues took some heavy lifting but my track record of being a good judge of customer lifetime value saved the day.

We managed to get the equipment installed and functional two days prior to the arrival of the chickens! Our customers were overjoyed and invited me to Asmara for a reception where I was hailed as the savior of Chickens. The food was sensational – Injera– a sourdough flat bread (that looks a little like a dosa but with less crispiness), and of course, doro tsebhi—spicy chicken stew! I was tempted to ask if these were the chickens we had “saved” but smiling to myself as we shared the communal platter, I realized this mightn’t be appropriate. Clearly, the birds and the equipment had been put to good use.

While telling this story brings back fond memories of a country finding its feet and its people determined to succeed, I learned important lessons as well.